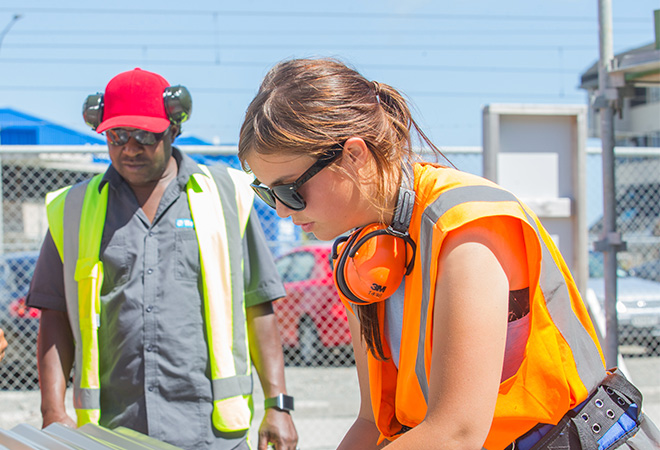 Women in Trades - Characteristics of an effective learning journey

The Women in Trades research sought to answer three questions:

A three-year project, jointly commissioned by the Ministry for Women and Ako Aotearoa, to increase the participation and success of women in construction and engineering related trades where they are traditionally under-represented. A collaboration of five Industry Training Organisations, Manukau Institute of Technology, industry and educational organisations and secondary schools.

The primary aims of the project were to:

The project's methodology included working directly with pre-trade and in-trade women; working with trade employers and working with data to establish benchmarks and measure change.

National Association of Women in Construction

The perspective of successful women in trades

The interviews we had were with 35 successful women in trades. They identified four factors that influenced their workplace success:

The women described five main barriers to entering and working in the trades:

Feedback from 565 employers described the greatest strengths women brought to the trades as being attention to detail, being easier on tools/machinery and softening workplace behaviours.

What can employers do to attract more women tradespeople?

This document provides an overview of the three projects.

This document unpacks the learning and career journey of 35 women who have succeeded in the trades and what we can learn from their experiences.

This documents analyses the feedback from a balanced mix of 565 employers who have or have not employed women.

Part 4 – Personas of women and employers in trade

The personas depict collective characteristics of successful women in trades grouped into seven personas of women from part two and two employer personas from part three.

The final output from the Women in Trades project led by BCITO for Ako Aotearoa.

Tools, resources and ideas for decision-makers to support the participation and success of women in trades where they have historically been under represented.

Tools, resources and ideas for employers to support the participation and success of women in trades.

Tools, resources and ideas for providers to support the participation and success of women in trades where they have historically been under represented.

Tools, resources and ideas to support your participation and success as a woman in trades.

Growing your trades workforce - attracting women to your jobs

This document provides information about how you can support women to enter the trades.

This booklet provides some suggestions for hiring women apprentices. New Zealand’s construction industry has a skilled labour shortage and the COVID-19 pandemic is likely to impact that shortage. To meet this demand it’s helpful to cast the net wider and look past the usual ‘go-to’ groups when hiring.

This booklet explores how you can get into the trades sector and includes benefits and opportunities.